Competition for Opera Roles in

Before applying to Tullio Serafin Opera Singing Competition, please, be sure to have all documents required (a short artistic bio which must be maximun 1 page, a high-definition photo, copy of enrollment payment bill, copy of the identity card or passport). 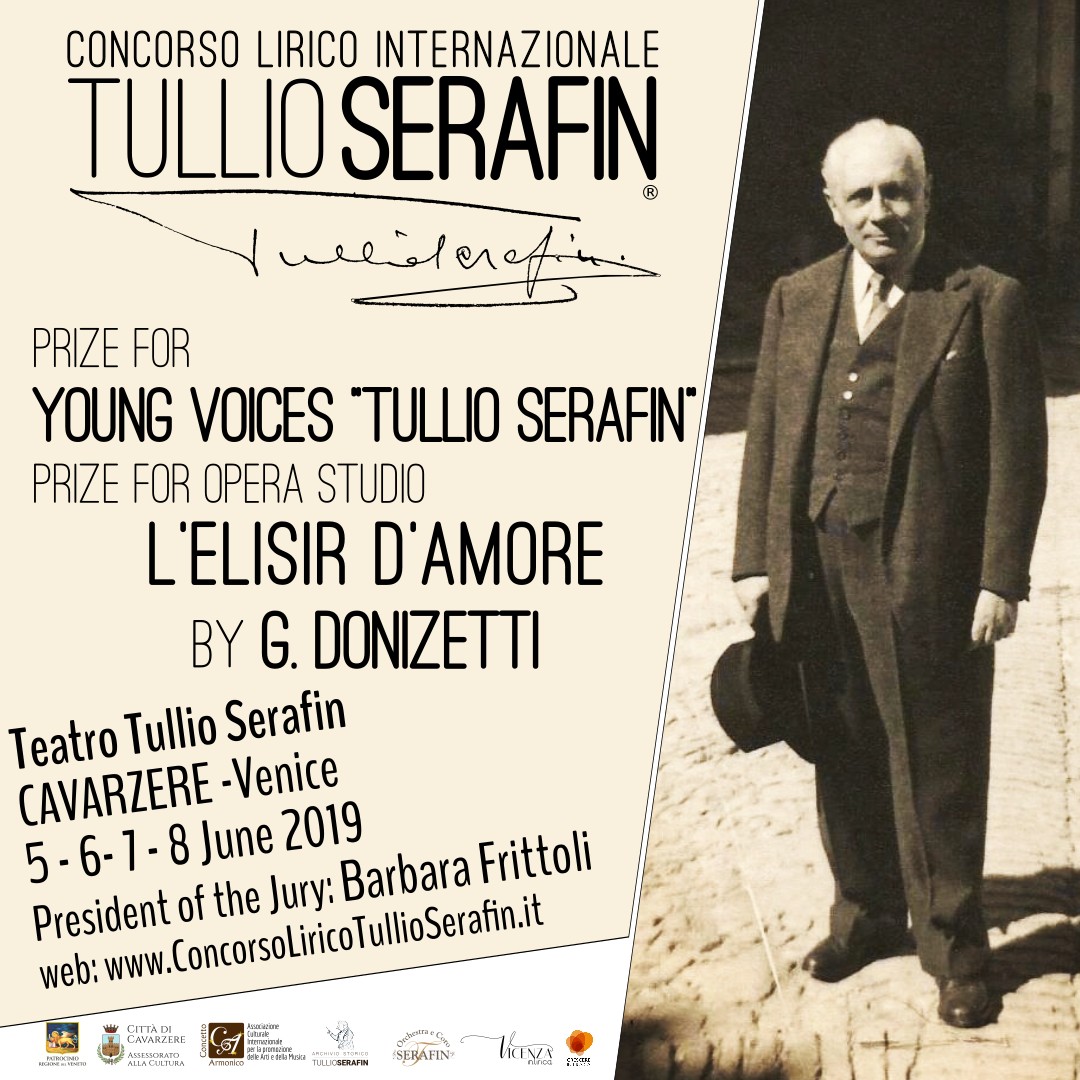 DOWNLOAD HERE THE PRINTABLE VERSION OF THE COMPETITION REGULATIONS

Laboratorio Corale IMVCT in collaboration with Crescere in Musica association from Thiene (Vicenza) are partners to the project.

The International Singing Competition Tullio Serafin is open to candidates of any nationality.

The age limit to participate to the competition is 36 years old. Candidates must be born after 1 January 1983.

The competition will take place in Cavarzere (Venice) at Teatro Comunale Tullio Serafin, from 5 to 8 June 2019.

To take part to the competition, candidates must send the following documents:

The fee must be paid through bank transfer to:

The enrolment form, with all the documents required at point 5, must be received by Concetto Armonico cultural association before the final deadline 23 May 2019 by:

Enrolments incomplete of any of the documents mentioned at point 5 or received after the deadline 23 May 2019 will not be taken into account. For the enrolments sent by mail the postmark will be proof.

During the eliminatory stage, all candidates will be given a random identification number which will be used for subsequent communications (point 11).

To each candidate an e-mail will be sent indicating the date and hour of the summons for the preliminary stage and the hour for a rehearsal with the pianist (if expressly required in the enrolment form). No changes of date or hour will be allowed. Rehearsals with the pianist may not be rescheduled. Candidates who are not present at the date and hour of the summons will be excluded and no reimbursement may be asked.

Candidates may choose to participate to one of the two folloing categories:

Candidates may not partecipate to both categories

Candidates participating to the competition for opera roles must:

The competition will be divided in three stages:

Candidates participating to the competition for opera roles must perform what the jury requires from:

The jury may choose one or more of these options.

Candidates participating to the competition for opera roles must perform the roles of the soloists in the opera, alone or with other candidates (duets, concertati, etc)

The president, in agreement with the jury, may stop the candidate’s performance at any moment. Candidates may be asked to repeat the aria. All the stages of the competition will be accompanied at the piano by maestro Sergio Gasparella, conductor of the opera, and by a substitute maestro.

11: Admission to the semi finals and the finals.

The names of the candidates admitted to the semi finals and finals will be communicated by the artistic direction after the Jury’s decision. The results will be affixed on the bulletin board of Teatro Comunale Tullio Serafin and published on the internet site of the competition with the casual number given to the candidate the day of the eliminatory (for privacy reasons names will not be published). Results will not be communicated by phone.

All candidates are requested not to leave Cavarzere during the competition without previous notice to the artistic direction.

The eliminatory stage and the semi finals will be in camera. The finals will be open to the public. All stages will be held at Teatro Tullio Serafin in Cavarzere.

Winners of the competition for opera roles will participate to the Opera Studio in Vicenza from 1 to 12 September 2019, held by the teachers mentioned at point 20, for the staging of the opera at Teatro Olimpico in Vicenza on 13 and 14September 2019 and at Teatro Comunale in Thiene on 12 and 13October 2019.

The jury will be composed by:

For the semi finals, the Jury will be joined by:

For the finals, the Jury will be joined by:

The Jury shall make its decisions in secret session by a majority vote (half plus one). In case of a tie, the president will cast the deciding vote. The Jury may decide not to announce any winner for one or more roles in the competition. The Jury’s verdict is unappealable and definitive.

The Jury may choose some other candidates from the finals as covers in case the winners cancel their participation before or during the opera studio. Covers will receive the same fee as the winners and the same expenses reimbursement as defined at point 18, reckoning their effective days of presence in Vicenza. Cover singers must grant their availability during the Opera Studio.

18: Expenses reimbursement to the role winners.

To the competition winners, after the performances at Teatro Comunale in Thiene, the following expenses will be reimbursed:

19: Contract for the role winners.

Upon enrolling, candidates commit themselves, in case they win the role, to sign a contract for the Opera Studio and the performances mentioned at point 14. Those who break their contractual obligations will be required to pay a fine equal to twice the established fee mentioned at point 21.

20: Teachers of the Opera Studio.

Teacher of the opera studio are:

Winners of the competition for opera roles will receive a pre-tax fee, for each performance, of 600,00 euros (six-hundred/00) for the roles of Adina, Nemorino, Belcore, il dottore Dulcamara and of pre-tax 360,00 euros (three-hundred and sixty/00) for the role of Giannetta

Winners of the Young Voices “Tullio Serafin” prize will receive:

Other prizes will be awarded:

All candidates admitted to the finals will receive a participation certificate.

25: Validity of the regulations.

Enrolment to the competition implies unconditional acceptance of these rules without reservation. The Italian version of the regulations concerning the Tullio Serafin International Singing Competition is valid. Legal routes are excluded.

By applying to the competition, the participant authorises Concetto Armonico – associazione culturale to make video and/or audio recordings, to take pictures, to transmit by radio or TV broadcast any of his/her lessons, rehearsals, concerts or Opera presentations, organized either by Concetto Armonico – associazione culturale or by selected third party organizations or individuals. In particular, the participant surrenders to Concetto Armonico all the rights of said video and/or audio recordings and pictures for any use that might be relevant to the event. Concetto Armonico reserves the right to use all pictures, audio and video recordings for promotional purposes related to its activities, or to release the audio and/or video recordings for demonstration or promotional purposes.

The present regulations are published on the internet site www.concorsoliricotullioserafin.it and deposited at the association headquarters: Concetto Armonico, Via G. E. di Velo, n. 133, Vicenza (VI).

The present regulations has been modify in order to add category for Young Voices “Tullio Serafin” prize.